Earlier this year, Sage announced a rather drastic change to its product portfolio when they communicated they would be bringing a close to the development of their flagship cloud product – Sage Financials. Now, when they say no further development what they really meant was no further innovation on the product. Sage will still be developing bug fixes and compliance requirements for Sage Financials, but there will be no further features introduced.

The question for many understandably was, why? Sage has invested so much into Sage Financials, so why the shift in focus? Quite simply, in their back pocket, they have a product just this month praised as ‘a Visionary in the latest 2019 Gartner Magic Quadrant for Cloud Core Financial Management Suites for Midsize, Large, and Global Enterprises’. When Sage first announced the acquisition of Intacct, I shared my thoughts on what this meant for the market with the team at Accountex – we knew back then that this was a big play for Sage in the cloud accounting space. Now, Sage has consolidated all their efforts into one, epic cloud-based product.

Sage Intacct is now available in the UK, and we have been lucky enough to be one of only 5 partners in the UK who have been chosen as implementation partners.

One of the great things about Sage Financials was the ability to bring multiple companies into one system. However, one of the most common challenges experienced by users was that the Chart of Accounts was based on the companies legislation. It could be quite complex trying to manage multiple nominal structures and then consolidating these to one combined Chart of Accounts. All just to report on those entities. Sage Intacct allows you to create complex reporting using accounting and dimension groups. This doesn’t necessarily need to match your legal structure, rather your reporting requirements.

For a Multi-Company platform, an area Financials could have been slicker in was intercompany transactions. You had to enter transactions in both the receiving and giving companies. Not a deal-breaker, but also not ideal. Sage Intacct works in a modular format meaning you only buy the bits you need. One of the available modules is the multi-company module, which helps support Sage Intacct’s mission to create the continuous close. As an added extra in this, you can manage intercompany transactions easily, it also automates intercompany eliminations. No more manual data entry!

Sage Intacct is legislatively compliant with the UK, US and Australian tax systems. Sage Financials is ahead of the game here as it does have a Spanish, French, Canadian and German template too. On top of those ‘Sage Standard’ templates, we have also been able to create custom templates for several of our customers. These include Hong Kong and Singapore.

One of the areas that we are keen to investigate in Sage Intacct is if/when tax compliance will be available for the broader European areas, and the wider APAC region. We will also be analysing how we can support clients with custom tax setups, as we did in Sage Financials. Watch this space!

In the multi-currency space, Sage Intacct not only has powerful foreign currency reporting capabilities but also has a true multi-currency ledger. Many of our Sage Financials customers manage Suppliers, Banks, Customers, and Companies all in different currencies – we see this being a real benefit of Sage Intacct.

Whether its multi-legislation, multi-currency or multi-company, Sage Intacct covers it all. Here are our key Sage Intacct feature highlights:

Sage Financials running off the Salesforce Platform has always been one of its biggest perks. It means we are able to utilise all the great Salesforce functionality that already exists. Complex access permission structures are one of these areas. Role-based permissions, hierarchies and field-level security are fantastic when properly implemented – but they do require a fair amount of Salesforce knowledge. This means setting up the basic company or transaction-specific permissions that most teams require is near on impossible and super complex.

Sage Intacct is designed for finance teams specifically and so the ability to manage the permissions of a financial team is native. That means not having to use our Salesforce wizardry to create basic permissions! Intacct allows you to create user profiles, restricting user access to specific entities and transactions relevant to the users’ job.

We touched on it briefly before, but one of the differences between Financials and Intacct is that Sage Intacct Pricing is modular. The UK pricing structure allows customers to scale up by starting smaller. You can begin with a core financials package, that you can then build on with additional modules. A few of our favourite modules include:

One of the biggest selling points of Sage Financials is its nativity to the Salesforce Platform. The seamless integration between the two is a huge driver for many looking to switch accounting packages. So, where does Intacct sit with Salesforce? Well, first of all, Intacct is not native to the Salesforce platform. This means it does not sit fully within your Salesforce Org. However, there is an integration module that provides an immediate, bi-directional synchronisation of data. Not only can you sync accounts, but you can also maintain orders, projects, changes, and renewals through Salesforce and Intacct. In addition, the synchronisation allows you to create orders from quotes direct from Salesforce with a single click of a button. You can even pop the Intacct screens through Salesforce so user experience often feels native.

Integration with Salesforce Chatter in Sage Intacct means Sales and Finance can communicate efficiently. You can speed up approvals, clarify orders, resolve queries and ensure an effective speedy service for your customers.

Whilst the news of Sage Financials development coming to an end was a disappointment to many, the future for Sage Intacct looks extremely bright. A bigger, more robust cloud solution with a greater depth of functionality. Whether you are looking to improve your Sage Financials or to switch to Sage Intacct, our team is eager to help! 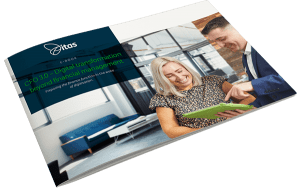 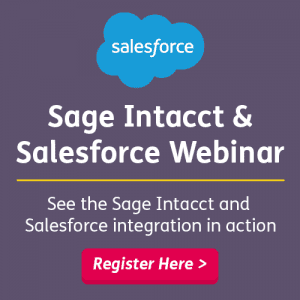