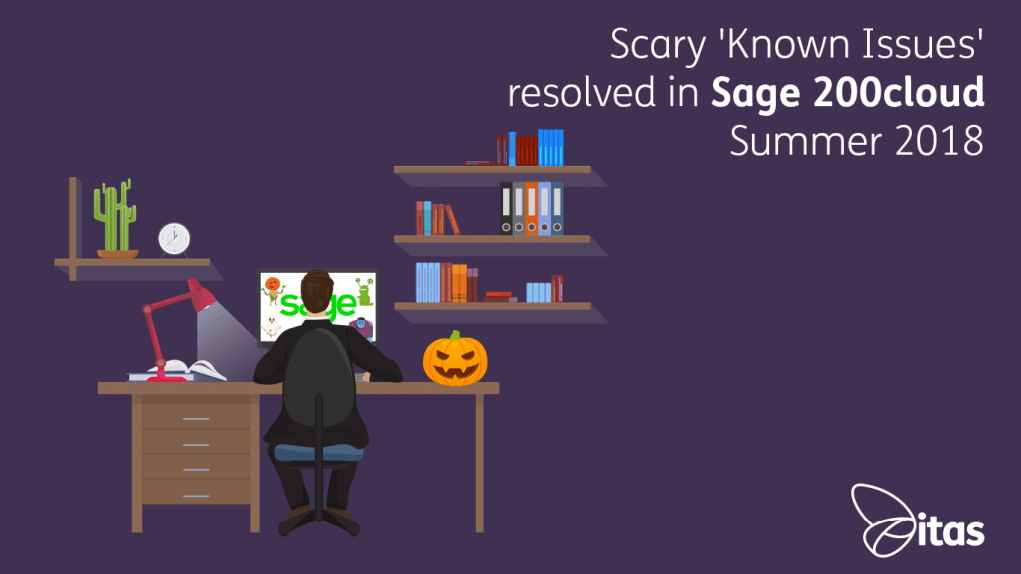 It’s almost Halloween! And instead of a trick, we are giving you a treat! There is nothing scarier than a bug in Sage 200cloud so we are taking a look at all of the known issues that have been fixed in the 2018 Summer release! There are a range of bugs for all of the modules in Sage 200cloud, so sit tight and see if you can find a known issue that you have come across!

Let’s start with Bug 7471 in Sales Order Processing! This was an issue with having an Additional Charge on an order with Stock Items present. In previous versions of Sage 200cloud, if you had a Sales Order with a Stock Item and an Additional Charge, the order would become ‘Ready for Invoice’ as soon as it is saved. This is not the case anymore and will only become ‘Ready for Invoice’ when lines have been allocated and dispatched! 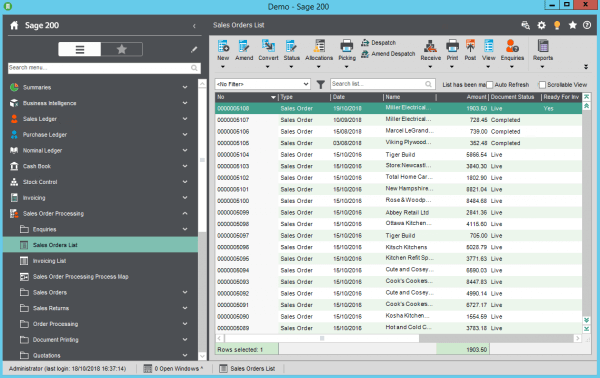 The next bug that Sage have fixed is issue 7211 which was causing issues in the Purchase Order Processing module. With this bug, you were unable to select a valid Nominal Account. The major issue with this was that the list of available accounts was restricted to 50 and it wasn’t possible to manually type in the Nominal Account, Cost Centre and Department. So if you had a nominal code with over 50 Cost Centres, then there were some instances where you couldn’t select some of them. This is now resolved!

Known issue 7709 is the next bug which has been fixed in the Nominal Ledger. This was another major issue that was causing havoc when depreciating a fixed asset. The depreciation function was ignoring the amount that needed to be allotted over each month. Thankfully, Sage have now resolved this and the depreciation is posting correctly.

Bug 7448 was another issue that was fixed in the Nominal Ledger. The Budget Statement Breakdown by Combined Nominal Budget mentioned in the previous bug was a victim to this issue. When you ran the report with criteria of ‘Is’ or ‘In’ on the Combined Budget drop-down menu, you would get a message to say that ‘The report could not be generated. No data was returned for the report’. When you run the report as is, it pulled through all combined budgets, including the ones that you had a filter on previously.

One bug for the works order processing module that has been fixed is 7534. This was an issue when completing a Works Order. When completed for a smaller batch of the required quantity, the amount of time increased for the next completion. This also caused an issue for other users as it meant they couldn’t process.

This next bug 7726, was found in the invoicing module. This issue related to the exchange rate on the invoice, it wasn’t retained when you saved or amended it. The exchange rate changed to the default rate set up in Currencies and Exchange Rates in Accounting System Manager.

This next bug was very frustrating for users who did the Bank Reconciliation. Issue 7026 stopped users from sorting on the column headers in the ‘Unmatched’ and ‘Matched’ items windows in the bank reconciliation screen. This made it harder for users to navigate to the date they wanted to reconcile as they would need to scroll through the list or use the right click and find a workaround.

Known issue 7684, is a massive step forward for those of you who use the spooler. Sage has completely changed where the data for this is held now which will make it quicker to open and view your spooled documents. They have also made some changes to the spooler screen, so keep an eye on our future blogs explaining this!

6466/7675. This was a nightmare for users who relied on their list views for information. The first issue is that the list views wouldn’t retain the sorting on the columns. If a user clicked to sort information one way, closed Sage 200cloud and re-opened, it didn’t save the sort. The second issue was the list view didn’t retain changes to column headers. For example, moving it do a different place on the list or removing an item from the ribbon. Whenever you logged out of Sage and back in, it would revert to the default settings.

So, there it is! All the known issues that have been fixed in the latest release of Sage 200cloud Summer 2018. Hopefully, not too scary and a nice way to end October. If you have any questions around the issues and resolutions applied in this blog, then let us know. Oh, and Happy Halloween!

Holly is friendly,outgoing and at the heart of the itas team. She is our resident Excelerator and Iman expert, who loves solving those tricky cases! A bit of a film buff, Holly enjoys nothing more than a good trip to the cinema – popcorn and all!